Note: the main goal is to get rid of data collection term

Currently there is not strict hierarchy in Sentinel components naming from the users point of view. A different version of naming hierarchy is used in the docs and in reForis: 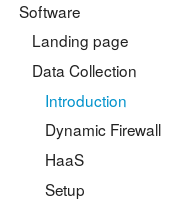 We should unify this and use the same convention wherever possible.

Unfortunately, there is not a simple guideline how to do that. Sentinel-related toolchain consists (from the docs/settings/user point of view) at least of these parts:

Probably the best solution would be to ignore the fact that HaaS client is not a direct member of Sentinel family and it's activation involves visiting haas.nic.cz

The bad thing is that Sentinel is depicted here not as a security-only project and involves also survey.

Since Sentinel is mainly a technology, it may be ignored. Security, including threat detectors and dynamic firewall should be strictly separated from usage statistics.

As survey is only a side-effect of Sentinel technology, we may pretend it's not even part of it:

This option is based on what has been already agreed and is used in reForis. Basically it renames Data collection to Threat detectors. Survey is still in this section although it's not a threat detector.